There was all kinds of fuss and frustration expressed by individuals earlier in the year, when several teachers started extolling the virtues of Knowledge Organisers.

A quick Google for this will reveal several examples of these on Google Images.

Most of the criticism was asinine, in some cases seeming to go out of its way to be obtuse.  For example, one criticism I can recall was ‘But pupils need to learn more than this!’ at a time that precisely no-one had claimed otherwise, and most had expressed how they were using knowledge organisers as a tool to develop schema forming (e.g. through self-quizzing key factual knowledge outside of lesson time, so the teacher could focus on fleshing out further knowledge, relationships, interpretations etc. during lessons.)

This is unfortunate, because it is possible to levy real criticism at knowledge organisers.

Another way of putting it would be to question whether knowledge organisers are just the first step in a greater journey of expanding our understanding of knowledge organisation, more broadly.

The first is how our mind works.  Concepts are associated with other concepts through some relationship. 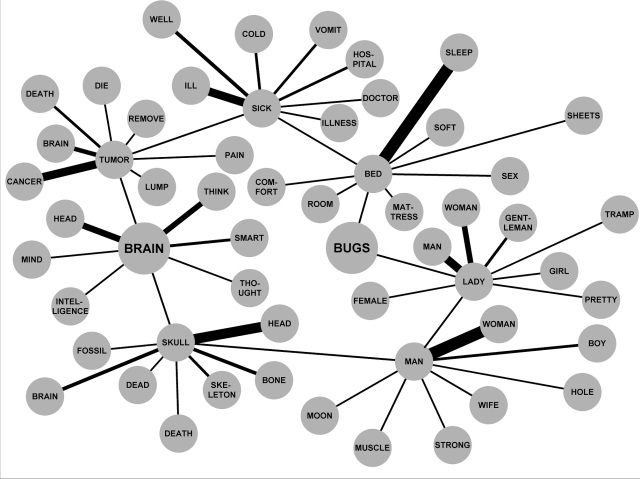 Lists are exactly what they sound like.  A list has a heading, and then its sub-points simply continue in length.  If more than one list is presented, the assumption is that there is no real relationship between them:

Reif argues that hierarchies are the most desirable structure – associative networks are difficult to mentally navigate, and lists have too little organising structure, being little more than a single grouping.

These are not the only ways of organising knowledge, a quick glance through the work of Nancy Duarte will quickly reveal that.

Or even just taking a look at MS Smart Art:

Siegfried Engelmann also has a fascinating series of principles around how knowledge should be organised and presented to learners, but that’s a story for another day.

This doesn’t mean they will be ineffective, not at all, but it does mean they might be less effective than they could be.

By ‘less effective,’ I mean it might take a learner more time to commit the facts to long-term memory, that they might do so with lesser storage strength, and that the relationships between the facts will be weaker, than if an alternative structure were adopted.

Note: Before I go any further, it’s worth noting that I can also see very good reasons for constructing knowledge organisers the way that everyone is constructing them, and I’ll speak to that at the end.

For now, I’m going to use a single example to talk through this, characters in The Tempest.

I finally saw this for the first time last month, and set about learning the plot and characters so that I could follow what was happening on stage.  SparkNotes presents character information as a list, similar to how it would be presented in a conventional Knowledge Organiser:

While reviewing this, I found I had to do a lot of mental work to formulate a mental image of who was whom, and how they related to one another.  I voluntarily undertook that work, but it would be easy for this to be presented to a child who didn’t automatically undertake that effortful work, or didn’t know how to, or struggled to hold and process everything in working memory simultaneously.

In that instance, the pupil would only see a list of unrelated loosely connected names, and wouldn’t develop the mental schema of how they relate to one another – it would resemble the so-called ‘rote learning’ that many teachers viscerally fear.

Here, relationships between characters are made explicit.  Size of box and colour show relative importance of the character in the play, and hint at who to read about first.  Ultimately, this is the mental schema we would want pupils to construct in their own mind; by laying it out transparently we guarantee success for everyone.

Note: I had wanted to try to follow Reif’s advice and construct a hierarchy, but for something like this there didn’t seem to be a useful way of grouping the relationships into ‘higher’ and ‘lower’ levels.  Anything I might have chosen – e.g. relationship to one another, importance in play, proximity on stage – all fell apart when trying to bring the groups together.

The associative network I drew, above, has some drawbacks.

If presented altogether, it is probably more overwhelming – more likely to induce cognitive overload – than the list; where do you start reading?  What do you read next?  etc.  (I ran into this problem a few times when trying to present several different overviews of all of mathematics to pupils – it was always too much information shared at once, and I didn’t see that they couldn’t possibly navigate it the way that I did.)

This can be overcome by introducing it to pupils in stages – something that Engelmann would do e.g. Start by showing only Prospero’s box, then the Orange Boxes…  However, this restricts its utility as a self-quizzing tool, something that pupils can make use of independently of teachers (indeed, Engelmann’s chapter on knowledge organisation assumes that the information is being presented to pupils by a teacher.)  It also limits its ability to serve as a single sheet of paper, given to pupils at the start of a new sequence of lessons, that presents all the most important facts in a given unit.

It’s a lot more difficult to construct: prone to perfectionism, and consumes much more time than a simple list.

Finally the benefit of the spatial layout is offset by its consumption of space – you can fit far less information into the same space.

As I said right from the start, there are good reasons that Knowledge Organisers are being constructed the way they are, and their utility and ease of construction means that probably shouldn’t be abandoned.

There are alternative structures, though, that could increase the probability of a given child’s speed in committing facts to memory, the storage strength and enduring retrieval strength of those facts, and their knowledge of the relationships between the facts.

It would be interesting to see the results if teachers started to experiment with these structures, in addition to the list.