Knowledge Frameworks – What other frameworks might exist for mathematics?

I feel like my examples from before (times tables, square and cube numbers, prime numbers) are all zoomed in very close compared with the other examples I gave for other subjects.  Well here’s one broader suggestion: 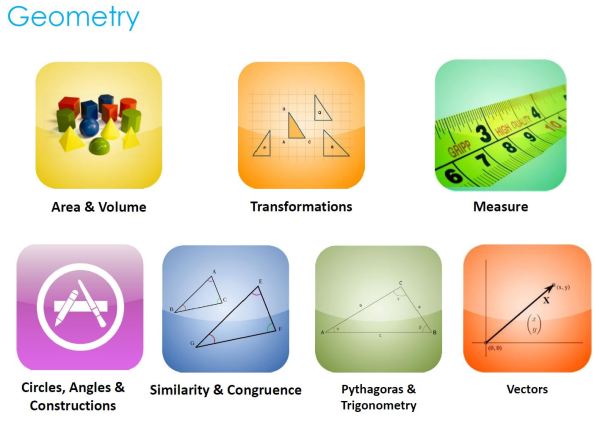 I created these before I started teaching.  We use much of this language all the time, and as teachers have a mental image in our minds much like this, but I seriously doubt that anyone I teach has this same overview… and how could they?  They won’t just pick it up organically; if I don’t make an effort to teach them, they won’t learn it.  How might I do that?

The first would be to have them recreate this structure, leveraging the testing effect until they could reproduce it fluently.

The second would be to ensure that pupils knew which part of the framework each new sub-topic or question type fitted into.

MCQs would be excellent for testing this, since it is an exercise in categorisation/conceptual understanding.

Which of these questions provides an example use of correlation?

or the other way around

Which parts of mathematics might be used in solving the following question?

In the second case, questions might require knowledge of more than one part of mathematics, and an MCQ would provide the opportunity to select more than one related topic.  It might even be interesting for problem-solving – one of the problems with problems is that novices cannot automatically see what kind of mathematics can be used for solving them.  For example in the question:

There are some cats and birds in a room.  Altogether there are 38 heads and 118 feet.  How many birds are there?

Most people do not automatically recognise this as being a problem that can be solved using simultaneous equations.  It’s not the only way of solving it, but an MCQ would provide both the opportunity for pupils to see it suggested amongst a list of other possibilities, which might spark a link previously unseen, without giving too much direction.  It might also help a teacher see different methods that children might opt for in their class.

So there’s another suggestion for maths, anyway, very different I think from my earlier suggestions.

Maths teachers – would you be prepared to spend lesson time building up broad and shallow knowledge of a framework such as this one?

3 Responses to Knowledge Frameworks – What other frameworks might exist for mathematics?