Knowledge Frameworks – What other foundational frameworks might there be?

In the last post I introduced what is essentially my own understanding of what I’m calling ‘frameworks’ of foundational knowledge.  They may well be the same thing as schema from cognitive psychology; I’m only avoiding that term because I think it refers to something more, and something more technically specific, than what I’m speaking about there.

Do we really want to go back to having kids memorise lists of kings and queens and dates of their reign… ?

A sense of place

I’m not a royalist by any stretch… so admitting that I might have been wrong, and maybe there was something to all this ‘dates of kings and queens’ business is not easy for me.  It’s obviously an idea that is still distasteful for others as well.

Here’s the reason for it though: they may serve well to people growing up in the UK as a framework for all other historical events from the last thousand years.  If you can connect a group of historical events together with the reign of a particular monarch then you start to build up an idea of what Britain during that time period looked like.  With that in place, any new event can be easily linked to that same monarch, adds to that mental image, and so very quickly builds greater storage strength for the memory.

Here’s the bit I was always missing: the kings and queens themselves might well be arbitrary.  There may be some particularly important people to know about, such as Henry VIII and the reformation of the UK, or Elizabeth I and her speech ahead of engaging the Spanish Armada, or King John and the Magna Carta – but beyond these, the totality of ‘dates of kings and queens’ would only serve as a framework onto which all other historical knowledge could be scaffolded.

In this sense, learning these is not about right-wing conservatism; it’s not about learning all about all the kings and queens, because ‘monarchy is important,’ but rather just a good framework for scaffolding on other historical knowledge.  The sceptical might fear a trojan horse here, in which case I would just encourage them to come up with their own framework that would serve the same role equally well, then we can talk about going with that instead.

For now, take a look at how one museum I visited earlier in the year opted to arrange its timelines: 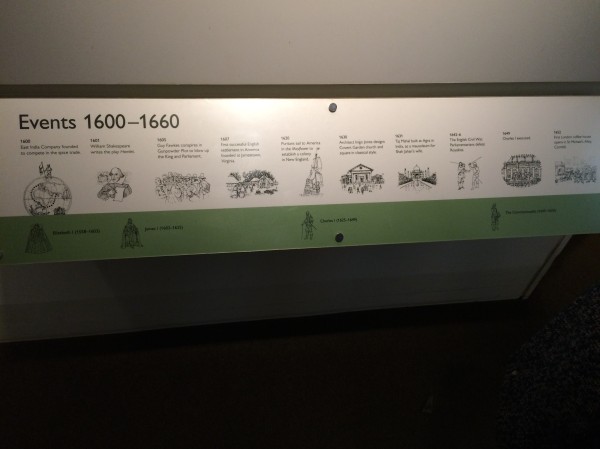 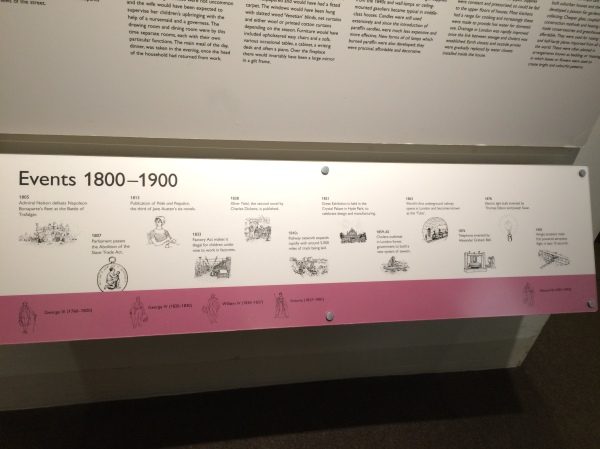 There was no other mention of kings and queens anywhere in any of the text in the museum that I noticed.  The actual kings and queens themselves were utterly irrelevant, they were just being used by the museum to try to attach things that might be unfamiliar to a framework, to give them a sense of place in time.

You could use Prime Ministers, but they change more frequently – meaning more to memorise; the granularity isn’t quite right – and they cover only a shallow period from recent centuries; the scope is insufficient.

A sense of scale

Kings and queens don’t do much pre-1066, though, so perhaps something else is needed for before then?  And what about so-called Deep History?  Anything anthropomorphic is utterly useless on that scale, so geological time periods maybe – at only 22 of them, it makes 195 countries seem like nothing.  On the other hand, if we’re never to study anything taking place in most of those periods would they struggle to develop and retain any meaning?  Would this end up closer to the picture people have in their minds when they say things like ‘rote learning’? – even if it is not rote by definition.  Or does that make a case to learn a little something about each, or some of those time periods, in much the same way that we learn a little something more about some, but not all of the countries?  Should fundamental frameworks of this kind guide our curriculum content?  Or not?

What about scale of the universe?  Do you know how far way the moon is?  The sun?  Pluto?  Our nearest star – in both LY and miles, for comparison with Sun and Pluto?  The diameter of the Milky Way?  The distance to the next galaxy?  The number of stars in a galaxy like ours?  The number of galaxies in the universe?  If we don’t know these things (and I don’t have a complete knowledge of all of these, incidentally) then how can we have any real grasp of the scale of the universe and our place in it?

Do you know how long homo-sapiens have been around for?  How about the duration of what we consider ‘history,’ as opposed to ‘pre-history’?  What about the dinosaurs, how long ago did they roam the Earth, for how long, when did they die?  How old is the Earth?  How old is the universe?  You could Google any of these facts right now, but if you do, I can almost guarantee you’ll have forgotten them again by tomorrow.  If you’ve forgotten them, if they’re not in your own mind, then how can you have any sense of the scale of time, and our place within it?

Again, to my shame I do not have answers to all of those questions I just posed, but, I do not see that as being ‘okay’.  I do not see it as not mattering, because I’ve survived this long without that exact knowledge.  I actually see that as something I need to rectify as quickly as I’m able.

Apparently an African proverb – I have not fact checked this

If you focussed your initial study of chemistry around the periodic table, in tandem with memorising the whole thing as sarcastically suggested here:

Might that actually profoundly aid learning?  I wrote before about how memorising poems was the missing link that meant I was finally able to understand and appreciate them.  It seems silly on the surface; surely memorisation is a rote and meaningless activity?  Yet in order to memorise you have to invest time, effort and thought, which in all turn lead to deeper understanding.

I’m seriously thinking about taking this one on, and seeing what effect it has on my understanding of chemistry.  I’ve had a look at the Memrise courses currently available, but none of them structure the table the way I think it needs to be done.  The countries and capitals course structured everything around the continents, which helped me to gain a sense of what was where, but all the courses currently available structure the periodic table in order of atomic number, whereas it’s the groupings of the table that relate the elements to one another and give them their properties.  One course did group by Group Number, but speaking again about granularity, I feel like this is too fine grain.  I suspect the better groupings first go around are things like ‘noble gases,’ ‘transition metals,’ ‘other non-metals’ etc. as shown here:

With this in mind, I would like to suggest a friendly challenge, and I’ll do so in the next post.

9 Responses to Knowledge Frameworks – What other foundational frameworks might there be?