Why we *must* teach skills, not knowledge

I’ve been interested in education for a long time.  I’ve been frustrated, and angered, by how much it turned out I wasn’t taught; by how much others knew, coming out of school, that I did not; left to forever feel I’m playing catch-up.  I’ve been similarly frustrated by the attitudes of some towards particular subjects: “History is pointless,” “I can’t do maths,” “What’s the point of learning French, when everyone speaks English anyway!”  And so forth.  I probably said the first and final lines myself at some point (I definitely said the final one when in Year 11, a lot.)

I took an optional course at university.  Its title was designed to appeal to scientists, but really it was ‘The philosophy of science.’  Here, for the first time, I learnt something shocking: nothing can be proved by science.  The notion of ‘scientific proof,’ in a strict philosophical sense, was a fallacy.  I’m sure I heard that in adverts all the time though, or at least implied… ‘scientifically proven to work.’  It takes time to reconcile this realisation with the power of scientific inquiry.  I suppose a peripheral understanding might be what leads some at the extremes into unproductive science-denialism, replete with failures to distinguish between a ‘theory’ and a ‘scientific theory.’

Regardless, this is surely an important point, and important to understanding what science really is, and how it really works, and being able to think critically about scientific ideas.  I was angry that it took this long for me to hear about it – 21 years old, in an *optional* module, three years into a four year course.  Unbelievable.

I thought more about this, and what I *had* instead been taught in school.  You know what, knowing Newton’s ‘three laws of motion’ really hasn’t done me much good, has it?  I’ve certainly never needed them, or used them in my life.  You know what I wish I’d been taught, what would be useful?  What science is, how it works, and above all the scientific method; that process of hypothesising, gathering evidence via carefully designed empirical experimentation, disproving or ‘failing to disprove’ the hypothesis, analysis of data, and so forth.  As I looked towards jobs, no-one really cared about my scientific knowledge.  What they cared about was my ability to think critically, analyse data, and be investigative.  Even if I had pursued a scientific career, doubtless the vast, vast majority of all that broad knowledge would have been useless, as I specialised in one area or another.

I originally intended to teach science.  I knew much about the rich tapestry of the scientific history, including the, again shocking, truth that what we today think of as science is barely 400 years old.  I also knew about the philosophy of science.  I knew none of these for mathematics; to me it was still a relatively stale subject, albeit, I was interested in overcoming the ‘I can’t do maths’ myth.

So how should we teach science?  Well we probably shouldn’t worry too much about all this knowledge for a start – useless it was.  Let’s make sure we teach the transferable skills that come from science.  That’s what all the employers want, and in the end, that’s what everyone and anyone can take from a study of science, and it will forever be of use!

We overestimate their knowledge, and underestimate ours

I had an offer with Teach First.  I spent a year preparing: I read books about mathematics, I consumed over 100 hours of lectures on its history, its philosophy, and other aspects of it that go untaught (Vedic maths anyone?)  I read textbooks on general teaching pedagogy cover to cover.  Then a month before I was due to start, I read an unpublished manuscript sent to me by a friend.

A sixty-A4-page thesis decried the teaching of skills.  What?  I didn’t even think we *were* teaching skills!  This can’t be right, teaching skills is the way forward; I’ve spent years thinking about this!  ‘We should teach knowledge.’  WHAT!  No!  I had every argument I needed for why this was pointless; my own personal experience especially!  The more I read, the more I became convinced this was written by some right-wing nut job.  Under any other circumstance I would have been quite happy to chuck it out after chapter 3, confirmation bias abound, but this came to me recommended by someone I trusted deeply, and for whom had more than enough  respect to reserve my judgement.  I had to ask who wrote it.  I learnt it was written by someone called Daisy Christodoulou.  Never heard of her; apparently she went to Warwick after me.  I was told she was ‘the most intelligent person my friend knew.’  Bold claim.  I was told she was completely left-wing, a liberal.  I was suspicious, but my suspicion had been softened enough to keep reading.

I read Chapter 4.  The position centralised.  Paraphrasing, I took the message now to be more ‘I’m not saying skills are unimportant, but we cannot teach them in the abstract; they depend upon knowledge.’  Chapter 5 was the one that really got me thinking though: “We overestimate their knowledge, and underestimate ours.”  This was filled with barely believable anecdotal examples of what the author’s pupils simply didn’t know… which was a lot; in fact it was so much that I would have otherwise taken for granted that even a child would know!  The chapter also argued that as well-educated adults, we have internalised our own knowledge to a point that it almost invisibly becomes ‘our intellect;’ we draw upon vast bodies of knowledge, accumulated over a significant period of time, to interpret what we see, read and hear, and then to formulate our own ideas, and we do it all almost completely unaware of the process, unaware of how much knowledge we use.

This chapter challenged my thinking up to that point more than anything else I had read; it forced me to question and re-evaluate everything.  I started to focus on the cognitive processes at work whenever I read the news, or involved myself in some casual conversation about educational, political, historical or philosophical ideas.  I started to realise just how much knowledge I really *was* drawing on.  In solving mathematical problems, I started to realise just how much mathematical knowledge I was taking for granted, and how swiftly I could bring it to bear, flicking between possibilities with ease as I searched for a method that might lead to a solution.

I felt that knowing something about what we mean by ‘scientific proof’ was important.  That hasn’t changed.  I can see it being possible to broach the philosophy of deduction and induction in there as well.

I wanted there to be a clear understanding of what the scientific method was, and just how science works, I guess, as a philosophy of knowledge acquisition.  That hasn’t changed.

What *has* changed is my attitude towards the knowledge content of my school education.  Despite studying for a Master’s in physics, I used to disdain the heavy focus on accumulation of scientific knowledge.  I was wrong; deeply wrong.  I made the same mistake made by many other well-educated people of undervaluing my own education, and how it contributed unknowingly to my intellect.

More than that though, now I understand something of how the interplay between our knowledge forms the basis of our intellect, I can see how important it is that we as a society can guarantee a certain minimum acceptable standard in what every person has a right to know about our scientific body of knowledge, regardless of what they go on to do later in life.  The sharing of this knowledge is not something we ‘do’ to unwilling children who have no interest, or see no relevance of it to their life today.  To borrow from Shakespeare:

The wing to heaven

There is nothing righteous about trapping people in ignorance, and nothing liberal about abdicating societal responsibility for guaranteeing every citizen a body of knowledge.  Such a corpus, being transparent, can be debated and modified openly, together, as a democratic society.

There might yet be things about the science curriculum that I would want to adapt, ways in which I would want to augment the ‘scientific facts’ and ‘scientific theories’ with knowledge of how they came to be, and why people cared; a sense of narrative to scientific endeavour.  What I will never again say, however, is that the scientific knowledge I was taught has been ‘useless,’ simply because I have never or rarely needed to apply it directly to my life.

For the ‘mock lesson’ section of my Teach First interview I was asked to prepare a lesson with the title ‘What types of forces are there?’ and then being directed to the National Curriculum for guidance on what to include, to help me prepare.  The 2007 document quite literally says this about the teaching of forces, in section 3.1a:

“…forces are interactions between objects and can affect their shape and motion.”

Can you imagine the stress of being asked to prepare for an interview on the topic of teaching what kinds of forces there are, and this is all you have to go on?  What if I miss some important forces out?  What exactly is the full spectrum of forces that we cover at school level?  Do I just teach force as a concept?  What about links between types of force, or the four fundamental forces?  Interview aside, how on Earth can we accept this as the reference point for the knowledge we expect to bestow upon future generations!

As a useful comparison, here is the 2007 NC for science compared with the E.D. Hirsch Core Knowledge Curriculum: 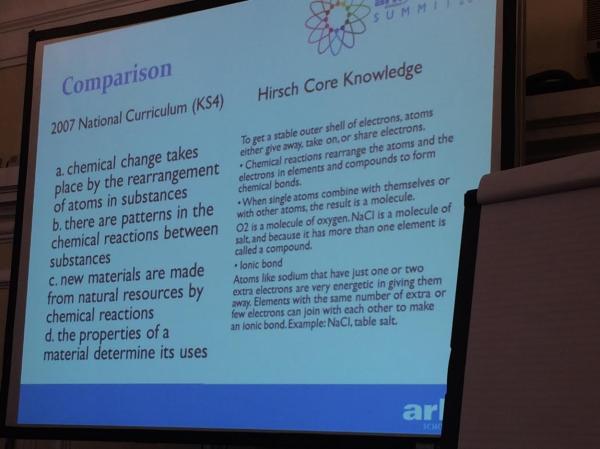 That was 7 years ago.  I haven’t looked up the proposed revisions.  Maybe someone can lift my spirits and tell me it’s all better now; if not, something has to change.

15 Responses to Why we *must* teach skills, not knowledge